Wow, it’s been a long ass time since I wrote an empties post.

It’s something I did once and didn’t feel the need to do again, but since my goal for the year is to use up a whole lot of stuff, I think we should check out some of my trash.

Note: this is something I decided to do a few days ago so I didn’t get to take photos of everything I used. I’ll do better next month!

Soap & Glory Clean On Me Creamy Clarifying Shower Gel: I’ve mentioned this stuff a few times. It’s amazing. Love the way it smells. Love the way it makes my skin feel. It’s my holy grail and is basically always in my shower.

Ulta Eucalyptus Mint Foaming Hand Soap: I know it’s kind of bougie to get my hand soap from a beauty store, but I do. I wait until the three for $10 sales and stock up, so these lovely smelling soaps end up being less expensive than hand soap from the drugstore. Win. I have four or five of them as backups.

Fresh Vitamin Nectar Moisture Glow Face Cream (sample): I was bringing this stuff with me on my travels earlier in the winter and really enjoyed it. My skin has been a little extra thirsty lately so I finished it up and for a second I considered buying the full size. Then I saw the price. Nope.

Clinique Take the Day Off Cleansing Balm (travel size): This also came traveling with me and I really like it. It rinses off cleanly and doesn’t make my skin feel gross. I have one use left, so I’m going to just use it up so I can put a different cleansing balm in the container for my upcoming travels. 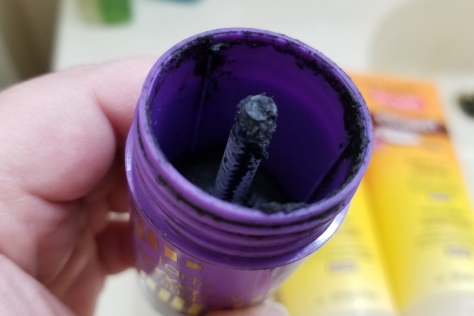 Tarte FRXXXTION Stick Exfoliating Cleanser: This is the third or fourth one of these that I’ve used, and every time I run out I get sad. I just love it so much. It’s a cleanser, scrub and mask in a convenient stick form. It comes with me when I travel to use at night after my oil or balm, and when I’m home I use it as a quick mask when my skin isn’t cooperating. I don’t love how expensive it is but it’s one of my favorite products from Tarte.

Lace Howood & Lavender Natural Deodorant: This is the hippie natural deodorant I talked about awhile ago. I like it. I don’t smell bad. I have two backups so it’s not a tragedy that this is gone, but I don’t use up many deodorants before they get weird and hard so I’m pretty excited about this.

I’m not the kind of person who declutters a lot of stuff for no reason, but recently I decided that I’m not going to force myself to use things that I hate. The only thing it does is make me cranky and not look forward to taking a shower or doing my makeup, and that’s not cool. Showers and makeup are basically my favorite things. So, some of this stuff I tossed, some I gave away. The point is that it’s out of my collection.

Garnier SkinActive BB Cream in Light/Medium: I reviewed this last spring and at the time I thought it was fine. The color is all wrong for me, but because it only comes in two shades (I still can’t believe that), there isn’t much choice. I found out later that my mom uses it and the color works for her, so it’s being passed on to her. There are too many good face products in the world for me to waste time trying to make this work on me.

Marc Anthony Hydrating Coconut Oil & Shea Butter Shampoo and Conditioner: I’ve never used a Marc Anthony product before this, despite hearing good things about the brand. I don’t have curly hair, really, but who doesn’t need hydration? Well, I hate this. Like, a lot. I don’t like the way it smells. The shampoo is too thick and the conditioner is too thin, so I was using them at drastically different rates, and that’s annoying. I don’t like the packaging because it holds a lot of water. There isn’t anything about these that I liked, so even though they’re not completely gone I’m tossing them.

Mizon Black Snail All In One Cream: I just reviewed this recently so I won’t go into detail, but it’s really not for me. This too is going to my mom. Or my aunt. Doesn’t matter as long as it leaves my bathroom.

All of my Colourpop Ultra Matte liquid lipsticks: I have so many of these, and when I first got into liquid lipsticks I really enjoyed them. Now I loathe them. I appreciate how cheap they are but they’re so drying and they get crusty and flaky pretty quickly, and that’s not cute. I’ve been moving away from matte liquid lipsticks in general, and since these are my least favorite formula of my least favorite type of lipstick, it’s time for them to go. I’ll be tossing the old ones and giving the newer ones to good homes.

St. Ives Detox Me Daily Cleansing Stick Matcha Green Tea & Ginger: When I found out that these cleansing sticks were coming out I was super excited. Stick products are awesome for travel; they aren’t messy and don’t need to be wrestled out of my bag for TSA, so everyone wins. There are good things about this stick, like the fact that there’s a ton of product for the price and it smells good, but it’s also full of coconut oil. That’s fine for an oil cleanser or balm, but that’s not what this is supposed to be. Also coconut oil is comedogenic, meaning it’s known to clog pores, so I’m not sure why they’d put it in a cleanser that’s supposed to be detoxifying and marketed to people with oily skin. Seems silly. So this went into the trash.

SheaMoisture Peace Rose Oil Complex Nourish & Silken Shampoo and Conditioner: This stuff has been kicking around since Dan was in Michigan last year, and I reviewed it then. He brought it home with him when he moved back, and somehow it then moved to Albany with us. Clearly we suck at getting rid of stuff. Anyway, I just found it when going through some of our other bathroom stuff, and I remembered that I don’t like it. It smells good, but it makes my hair feel a bit ratty. I’ll either toss it or pass it on to Dan’s oldest sister, since I know she loves it.

L’Oreal Paris Pure Clay Cleanser – Purify & Mattify: Another thing that made the trek from NY to Michigan and back again. I really hate this stuff. It somehow makes my skin feel extra dry, but also dirty. I don’t know how that happens, but it seems like the opposite of what a cleanser should do. I reviewed it more in depth when we were still in Michigan last year. It’s now going in the trash. Happy trails terrible cleanser.

What’s in your trash this month? How do you feel about decluttering things you hate? Do you force yourself to use them?