I’m feeling a bit more like myself today, so let’s talk about this random beauty subscription.

I liked it when I received it at the end of August, so I kept the subscription. I’m not as crazy about it this month. 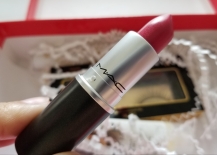 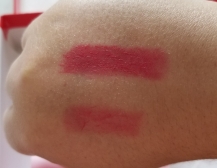 Sorry about the dry skin. It’s getting cold and it happens.

Confession time: I’ve never owned a MAC lipstick. Or any other MAC product.

I don’t know if you’ve noticed but I’m a bit contrary, just in general, so when MAC was *the thing*, I chose not to buy any of it. In the years since I’ve been curious because their products are talked about so often, but I haven’t gotten around to purchasing anything. The inclusion of a full-size MAC lipstick in this box makes it more than worth the price, but I don’t know how I feel about the color. I don’t normally wear bright, watermelon pinks, though I do like that this one can be applied lightly for a more sheer look.

The other available option for this month’s box was Ruby Woo, and I really wish I’d gotten that one.

I’ve never used a Drunk Elephant product before, but I’ve wanted to; I just haven’t been able to talk myself into spending that kind of money on any of them. I’ve heard great things, of course, because it seems like anyone who’s put this stuff on their face loves it, so I’m excited to try it. It’s not full size because that would be insane, but it’s bigger than I’ve seen in other subscription boxes. It’s a whole half ounce. 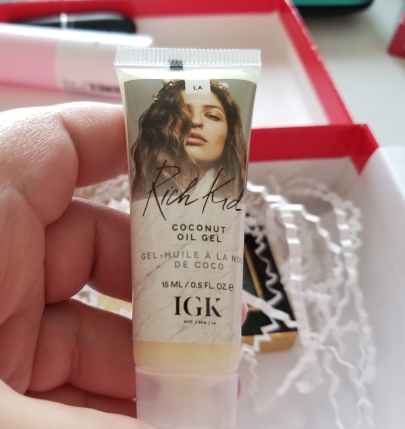 I’ve received this in several other subscription boxes and I kind of hate it. I have oily hair so coconut oil isn’t something I routinely use. By routinely I mean ever since I also really hate the smell. It’s an odd consistency too. I’m disappointed that it was included with this box because it’s going directly in my giveaway box.

These are pretty and wispy, but I don’t wear false lashes. I can’t imagine ever wearing them. They just don’t fit my lifestyle; it’s a step that takes extra time, and I don’t spend any time in places where lashes would be required or even appropriate. I work from home and it’s not like I’m going to wear them around the house. I don’t know… I don’t really get the whole fake lashes thing. I’ve never seen them on someone in real life and thought they looked good. At least this box included glue. The last time I got lashes in a subscription box it was just the lashes, and I found it really weird.

Anyway, these two items are following the IGK gel into my giveaway box.

So from a monetary standpoint, this box is definitely worth it. The lipstick alone is almost twice what I paid for the box. My disappointment lies in the fact that I’ll only use 40% of the products. I’ve seen some spoilers for October’s box and so far it looks better, but if I’m disappointed again I’ll likely cancel.